After having shot a good bit of video this past weekend, I found a lot of my HMC40 footage to be full of digital noise and artifacts. This is due to the fact that I had pumped the gain up as high as it would go in many instances (+24dB) because of very low light.

Because the footage will be used for a paying client, I decided to spring for a piece of software that I had been eying for a while — Magic Bullet Denoiser from Red Giant Software. It does exactly what it says: it removes the noise from your video, cleaning it up and making it look a thousand times better. 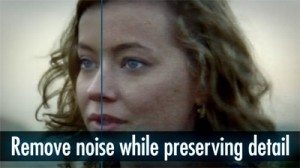 I couldn’t be happier with the results. You can see before/after images at Red Giant’s website, and they’re not exaggerrating. It’s absolutely amazing that the video can look so good after being run through this plugin.

However, there are a couple major drawbacks that I’ve discovered.

First, there is no plugin for Premiere. Magic Bullet Denoiser is only offered for Final Cut Pro and After Effects. So, since I use Premiere, I have to render the clips in After Effects and import them into Premiere, which is an extra step and lots of added time.

To try to get around a lot of the rendering, I tried using Adobe Dynamic Link to pull in the After Effects comps. My thinking was that I wouldn’t have to render out of After Effects; I would only have to set up the comps and them import them into Premiere. When I dropped the imported comps into my Premiere sequence, playback was brought down to painful levels. I’m talking maybe half a frame per second. It was bad. And it’s not like I have a slow computer — it’s blazingly fast, with lots of RAM and full use of the Mercury Playback Engine.

The second major drawback to this plugin is that it’s extremely buggy. I experienced dozens of After Effects crashes while either applying the Denoiser to a clip, or rendering a Denoised clip. It was very frustrating.

The plugin’s instability is well-known among users, and I read a lot about it before I bought it. I just didn’t think it was this bad. So I wrote up a support ticket at Red Giant’s website, and they told me they were working on the issue, and would let me know when an update is available.

The plugin is $99. Would I recommend that you buy it? I guess it depends on your level of patience, and whether you can spend lots of time rendering on a computer you don’t need for other purposes. Like I said, the results are stunning. But getting those results is definitely trying.