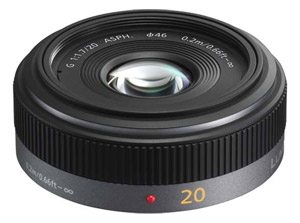 I purchased this lens for my GH1 a couple months ago, while it was out of stock. I went to Ebay and found a used one for $50 over retail, willing to pay that much because I heard such great things about the lens. Plus I had a shoot coming up that I wanted to use it with.

I was attracted to the lens due to its performance in low light — f/1.7 does wonders in dark environments. It’s sharp and focuses reasonably well. I love the quality it produces.

The first time I used the lens, I found that I was getting some strange flare. Bright lights caused odd-colored ghost reflections on the screen. Upon closer inspection after the shoot, I realized that a UV filter had been placed on the lens by its former owner. I had also attached the third-party hood that the former owner had thrown in the box. I read up about UV filters on the GH1, and they don’t play well together a lot of times, causing flares easily.

I removed the UV filter and put the hood directly onto the lens.

During the next shoot, I was happily shooting with this lens on my GH1, and suddenly the camera stopped focusing — manually or automatically. I’d turn the focus ring and nothing would happen — it looked like the lens was stuck on infinity. I was in the middle of shooting an event, and was nearly in a panic. After 20 minutes of turning the camera on and off and switching lenses, the 20mm began to behave itself again.

It acted up for the rest of the shoot, sometimes refusing to focus. I even tried the lens on my other GH1, and it did the same thing. The first thing I thought of was that the drastic changes in temperature and humidity were affecting the electronics inside the lens. I’d go from 90-degree heat and thick humidity, into very cool air conditioning — back and forth.

But I found that almost no one was having this problem. The guys at a  local camera shop were baffled, as were Panasonic tech support and online forums. I was ready to ship the lens to a repair center, but stumbled on a post on a forum about someone’s 20mm lens having trouble focusing after using a third-party lens hood.

Could it be? I had never suspected that a lens hood would have any kind of negative effects on a lens. But lo and behold, it seems to be true. I take the hood off, the lens focuses. I tighten it down onto the lens, and the lens won’t focus. If I loosen the hood a bit but leave it on the lens, it’s fine.

Apparently, the threads on some third-party filters and hoods somehow obstruct the part of the lens that moves in and out to focus. When I was using the hood in conjunction with the UV filter, I didn’t have the problem because I guess the UV filter’s threads are kosher. But I don’t want to use the UV filter anymore.

So, lesson learned. From now on, when I use this lens, the end of it will be completely naked.