I’m ashamed to see that I haven’t posted since October. My New Year’s resolution is to post much more regularly. Which means that I’ll try really hard to post here for a week or two, then probably drop off the face of the earth for several months. You know the drill.

Well, here’s what’s been going on: 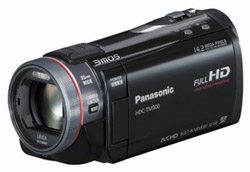 I picked up a Panasonic TM900. What a sweet little camera! The darn thing shoots 1080/60p, which is unheard of in most professional cameras, let alone consumer ones. I can’t wait to use this one on upcoming projects.

Perhaps I’ll start shooting in 24p. I know I’ve expressed my distaste for this frame rate, and I haven’t changed that opinion. Out of necessity, though, I just might make the switch from shooting 720/60p to 1080/24p. Why? Read on.

Apparently I’ve been living under a rock for the better part of 8 months, because an update was issued for the GH1 hack which enabled all models of the camera, not just older ones, to take advantage of the hack. That means that I can shoot native 1080/24p on both of my GH1’s now, without having to worry about deinterlacing or unwrapping the 24p from the 60i wrapper that the GH1 likes to do. Because 24p is the only frame rate available on the GH1 in 1080 resolution (and I darn well ain’t giving up my GH1’s), I may switch to 24p, for no other reason than to go to 1080 resolution. Will I regret this? Probably.

Look for a redesign of this blog soon! I’m already sick of the way it looks now.

On the music front, I really don’t have much time to play anymore. Lately I’ve been making an effort to pound on the bass every day, but I get blisters now. Fun. Drums are out of the question because of the quiet required by my young son.