I decided to brew my second batch of beer solo, after creating my first batch a few months ago (which turned out wonderfully) with my friend, a veteran brewer. It’s really not that difficult — it’s all about sanitization, timing, and being able to follow directions. Unfortunately, it’s the “following directions” part that led to some problems.

I went down to a local brewing shop and picked up the Brewer’s Best kit for Rye Pale Ale, and waited for a day when my wife was away for the afternoon. Preparation, steeping the grains, and boiling the wort all went smoothly. I love the wonderful grain smell of making the wort! It fills the house and makes me hungry for bread.

I cooled the wort, put it in the fermenting bucket, added water, added the yeast, and sealed it up. Down to the basement it went, and bubbled away for a week and a half before I opened it up to dry hop it. I racked it (siphoned it into a new fermenting bucket), and was alarmed when the amount of beer only reached the 4 gallon mark. There was supposed to be 5 gallons.

There could only be two explanations for this:

What had actually happened? I’ll leave it up to you to decide.

Well, there was no turning back at that point. I threw in the hops, sealed it up again, and hoped for the best. A couple weeks later I bottled it, taking a taste of the uncarbonated brew — and it tasted good! Rich and strong, but good.

Two weeks later, I was podcasting via Google Hangouts, and one of the guests was a beer enthusiast. I figured it would be a great time to try the beer. And here’s what happened. 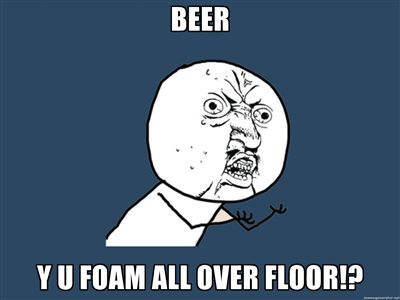 At first I was perplexed by the explosion of froth that came forth. I tried to figure out how I was going to salvage this lot of beer — the kit cost around $45, and I wasn’t about to throw that all away. The beer tasted great — it was full of flavor, and at a higher ABV than originally intended. It’s almost like I made an Imperial Rye Pale Ale by reducing the recipe volume by 20% (something I’ll have to keep in mind to experiment with in the future). I scoured online resources in my attempt to discover how to salvage over-cabonated beer.

Alas, there is no easy solution. The best advice I could find: keep it really cold. I wasted several bottles trying to find a way to open them and waste the least amount of beer due to foaming.

But the more I thought about it, the more sense it made. I used the full amount of priming sugar that the 5 gallon recipe called for — on 4 gallons. Of course that’s going to over-carbonate! I just wasn’t thinking when I added the sugar before bottling — I should have used 20% less.

Needless to say, there’s been a lot of wasted beer in this batch, which is a shame. But I came up with a strategy to try to control the foaming, which has worked fairly well: I’m using wine bottle stoppers. 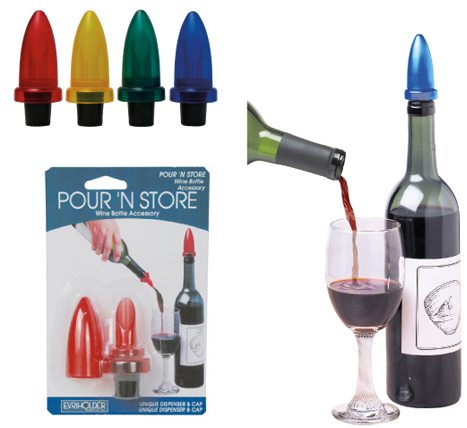 I found that when I pop the cap off one of these bottles, I have roughly three seconds before the foam erupts. So I jam in one of these stoppers, which seals things off again. Then I wiggle the cap of the stopper around, releasing small amounts of carbon dioxide. Eventually it gets to the point where I can take out the stopper and drink the beer, even though the foam will slowly rise. But at least it’s controllable.

And a word of caution to those who may want to try my wine bottle stopper strategy on over-carbonated beer: make sure you are quick to release the carbon dioxide after putting the stopper in. The stopper cap holds weakly to its base, and will suddenly shoot off at bullet speed if you wait too long to release the pressure. It’s happened to me a few times, and if I had been in the line of fire, I would likely be dead. The caps to these stoppers are pointed, and are surely deadly under that pressure at that range.

I chalk it all up to the beer brewing learning curve, which is actually not as steep as I thought it would be. I’m thankful that I could still enjoy most of the beer, and learn a lot in the whole process.